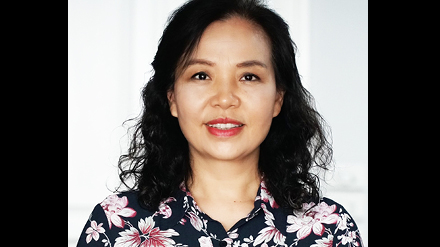 “It is with great pleasure we announce the honoring of Dr. Phuong Lan with this award,” stated the President of Film Expo Group, Andrew Sunshine. “CineAsia and the MPA have worked together for many years to recognize individuals who have gone above and beyond for the industry.”
“Dr. Lan has been at the forefront of protecting the rights of filmmakers in Vietnam,” said Belinda Lui, President and Managing Director Asia Pacific, Motion Picture Association. “We are honoured to recognize the significant contribution Dr. Lan has made to strengthening copyright during her tenure in various leadership roles in government and industry. Over the years, Dr. Lan has initiated numerous knowledge exchange programs, in Vietnam and at film events around the world, and convened local and international partners in this productive enterprise. These efforts have helped to build a healthy and sustainable film and television industry in Vietnam that is increasingly competitive on the world stage.”

Dr. Ngo Phuong Lan is Chair of the Vietnam Film Development Association (VDFA). Dr. Lan founded the VFDA in 2019 and was subsequently elected Chairwoman by its members. She was formerly the Director of the Vietnam Cinema Department which falls under the Ministry of Culture, Sports and Tourism.

Her decorated biography includes roles as Chair of the Board of Theory and Criticism of Vietnam Cinema Association (2005-2010), Director of the Hanoi International Film Festival (2011-2018), Member of the Central Council for Theories and Critiques of Literature and Arts (2016-2021) and Member of the Network for the Promotion of Asian Cinema (NETPAC).

She served on the jury of various international and national film festivals and has received a number of Awards for her contributions to the film industry. As a renowned film critic, Dr. Ngo Phuong Lan’s essays and reviews have been published in a number of newspapers and magazines such as Cinemaya. She is also the author and co-author of numerous books on cinema, published in Vietnam and abroad.

Dr. Lan was born in Hanoi. She graduated from the Soviet Union National University of Cinematography (VGIK), Moscow in 1988. She received her Ph.D. in History of Culture and Art at the Institute of Culture and Information, Hanoi in 2005.

# # #
About CineAsia
CineAsia will take place from 5-8 December 2022 at the True Icon Hall in Bangkok, Thailand. The CineAsia trade show is where cinema exhibition and distribution professionals come to do business and network. The convention will also feature product presentations and screenings of major upcoming films, exclusive sponsored events, and seminars relating to current and future trends happening across the industry.
Additional information on CineAsia can be found at www.cineasia.com.

The Motion Picture Association (MPA) Asia Pacific represents the interests of the six international producers and distributors of filmed entertainment. To do so, they promote and protect the intellectual property rights of these companies and conduct public awareness programs to highlight to movie fans around the world the importance of content protection. These activities have helped to transform entire markets benefiting film and television industries in each country including foreign and local filmmakers alike.

The organization acts on behalf of the members of the Motion Picture Association, Inc (MPA) which include: Walt Disney Studios Motion Pictures, Netflix Studios, LLC, Paramount Pictures Corporation, Sony Pictures Entertainment Inc., Universal City Studios LLC, and Warner Bros. Entertainment Inc. The MPA has worldwide operations which are directed from their head offices in Los Angeles and Washington, D.C. and overseen in the Asia Pacific by a team based in Singapore.